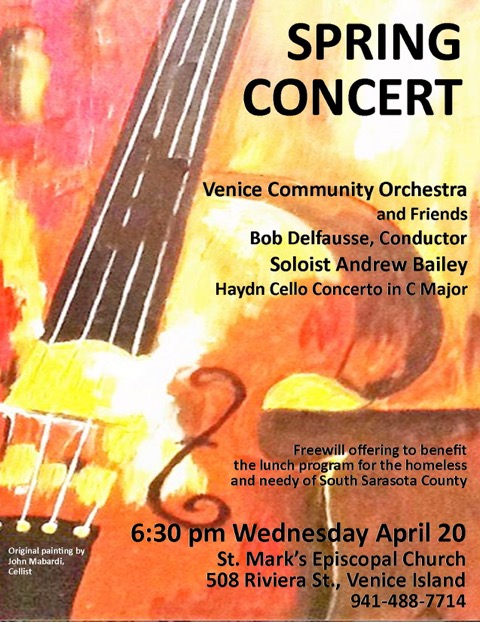 Twelve-year-old cellist Andrew Bailey performed with the Venice Community Orchestra, conducted by Bob Delfausse, in a concert to benefit the Interfaith Outreach Bag-Lunch Program for the needy at 6:30 PM on Wednesday, April 20, 2016 at St. Mark’s Episcopal Church in Venice, FL.

A student of Julliard artist Ann Alton, Andrew performed a solo in the Haydn Cello Concerto in C Major and music from the Oscar winning film Schindler’s List. Open to the public, the free concert also included works by Corelli, Debussy, Grieg, Mozart, Schumann and others, as well as selections from The Sound of Music and a premiere of the Delfausse arrangement of When the Saints Go Marching In.

A prominent jazz musician, Delfausse has also led orchestras and taught at colleges in New York and elsewhere and holds a doctorate in musical composition. His wife Ann Alton, an internationally recognized cellist, has been on the faculty of the renowned music conservatory The Julliard School in New York. The couple now resides in Venice.

Soloist Andrew Bailey, also of Venice, began serious cello studies at the age of seven. His first orchestral experience was as a member of the Venice Community Orchestra in 2012, and he was delighted to return as a soloist with the group. Andrew has given recitals at the Venice Art Center and at Jacaranda Trace, and at many other venues. He has most recently appeared as a soloist at a sold-out performance of the Venice Concert Band. He has won scholarships and awards from the Venice Musicale and Englewood United Methodist Church and was recently awarded runner up in the Anna Maria Island Young Artist Solo Competition. He studies cello with Ann Alton.

The Venice Community Orchestra, led by professional music performers and educators Bob Delfausse and Ann Alton, is comprised of dedicated amateur musicians who enjoy playing classics together for charitable causes. They are assisted by professional musicians who have generously donated their talents and time to perform at the concert including Carla Belosa, Kevin Belosa, Mary Belosa, Lorraine Hogle, Chris Riley, Karolyn Silbaugh and Beverly Whitby, who perform in orchestras in Port Charlotte, Sarasota and Venice.

Though admission to the concert was free, donations were accepted to support the bag-lunch program of Interfaith Outreach, which provides over one hundred lunches each week year round to those in South Sarasota County who need a helping hand.

If you do not see the videos below, your browser is most likely blocking them. You will need to “unblock” the content for this page in order to see them.