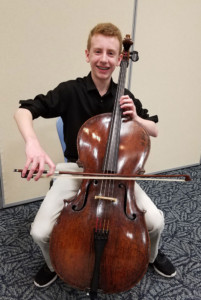 Fourteen-year-old cellist Jack Gallahan performed with the Venice Community Orchestra, conducted by Bob Delfausse, in a concert to benefit the Interfaith Outreach Bag-Lunch Program for the needy at 6:30 PM on Wednesday, April 19, 2017 at St. Mark’s Episcopal Church in Venice, FL.

Gallahan began studying music with piano lessons at the age of five. After joining his school orchestra, he re-focused his musical energies on the cello and began studying with Julliard artist Dr. Ann Alton. Recognizing the positive impact of music on the lives of others, he started a program called “Music for Medicine” and raised the money to purchase a baby grand piano for the lobby at Sarasota Memorial Hospital.

A prominent jazz musician, Delfausse has also led orchestras and taught at colleges in New York and elsewhere and holds a doctorate in musical composition. His wife Ann Alton, an internationally recognized cellist, has been on the faculty of the renowned music conservatory The Julliard School in New York. The couple now resides in Venice.

The Venice Community Orchestra, led by professional music performers and educators Bob Delfausse and Ann Alton, is comprised of dedicated amateur musicians who enjoy playing classics together for charitable causes. They are assisted by professional musicians who have generously donated their talents and time to perform at the concert including Carla Belosa, Kevin Belosa, Mary Belosa, Lorraine Hogle, Chris Riley, Karolyn Silbaugh and Beverly Whitby, who perform in orchestras in Port Charlotte, Sarasota and Venice.

Though admission to the concert was free, donations were accepted to support the bag-lunch program of Interfaith Outreach, which provides over one hundred lunches each week year round to those in South Sarasota County who need a helping hand. The April 19, 2017 spring concert raised $2,356, enough to fund 5 months of the free lunch program for the profoundly needy at the Center of Hope. This was a huge success by all accounts and we have been booked in for next April 18 already.

If you do not see the videos below, your browser is most likely blocking them. You will need to “unblock” the content for this page in order to see them.