Venice, Florida, April 29, 2015 – Bassist Nancy Leipold, who divides her time between Venice and Michigan, doubles on the French Horn…and on the violin…and on the alphorn…and on the banjo. And in addition to playing with the VCO, this retired nursing professor performs with the Gulf Coast Banjo Society at Snookhaven and with the Venice Concert Band, where she plays French horn and recently a banjo solo that was remarkable enough to draw the attention of the local media. This is a recent photo of Nancy, performing her solo in front of the ninety piece Venice Concert Orchestra. There were a thousand people in the audience. BRAVO!! 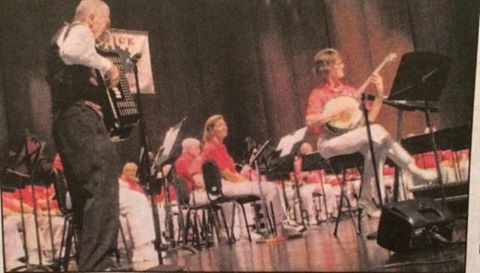 Cellist Margaret Bartley, who summers in the Adirondack mountains of New York, besides playing in the orchestra is a writer with a book to her credit. “Grisha,” the story of legendary cellist Gregor Piatagorsky, was written as her master’s degree thesis in the Johns Hopkins University creative writing program. She became interested in the world renowned Russian cellist when she learned that his summer home was across the street from her husband’s childhood home in the mountains of upstate New York. Piatagorsky, along with other musicians of the NY Philharmonic, summered in the Adirondacks, where the orchestra and the Julliard School of Music both had summer programs. “Grisha” is sold on Amazon.com. If you decide to read it, leave yourself time, because once you start it, you won’t be able to put it down.