Venice, Florida, April 12, 2017 Fourteen-year-old cellist Jack Gallahan will perform with the Venice Community Orchestra in a concert to benefit others at 6:30 p.m. on Wednesday, April 19 at St. Mark’s Episcopal Church in Venice, FL.

A ninth grader at the Pine View School in Osprey, Gallahan will solo in Gabriel Faure’s Elegie Opus 24 on a gorgeous 300-year-old cello and join the orchestra in a concert of classical and pops favorites. Open to the public, the free concert will also include works by the Beach Boys, the Beatles, and highlights from the Broadway smash South Pacific.

Gallahan began studying music with piano lessons at the age of five. After joining his school orchestra, he re-focused his musical energies on the cello and began studying with Julliard artist Dr. Anne Alton. Recognizing the positive impact of music on the lives of others, he started a program called “Music for Medicine” and raised the money to purchase a baby grand piano for the lobby at Sarasota Memorial Hospital.

Although admission to the concert is free, donations will be requested to support the bag-lunch program of Interfaith Outreach, which provides over one hundred free lunches each week year round to those in South Sarasota County who need a helping hand.

Interfaith Outreach, a charitable organization, coordinates the distribution of free food for nearly 100,000 meals and snacks a year in the Venice area through four programs: BackPack Kids in conjunction with the All Faiths Food Bank, weekly community dinners that rotate among four churches, the bag-lunch program and in the winter a cold weather shelter. 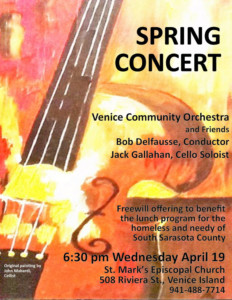